Could TLR7 Agonism be an Effective Prophylactic Treatment Against SARS-CoV-2 Infection?

Introduction: An outbreak of respiratory illness (COVID-19 Disease) caused by a novel coronavirus, namely SARS-CoV-2, was first detected in Wuhan City, Hubei Province, China. Infection by this coronavirus has been acknowledged as a global pandemic. The lack of an efficacious therapy to treat COVID-19 disease has galvanized R&D activity globally to identify novel drug candidates or existing drugs that can be repurposed. Several potential drug candidates for COVID-19 have been proposed in several recent publications. InveniAI’s AI- and ML-based technology platform has identified several additional potential drug candidates as well as drug targets, including Toll-Like Receptor 7 (TLR7). Previously TLR7 agonists have been tested in several viral diseases.

TLR7 Host Protein as an Antiviral Target: The TLR family of proteins plays an essential role in pathogen recognition and activation of innate immunity. In particular, TLR7 has been shown to play a significant role in the pathogenesis of autoimmune disorders, as well as in the regulation of antiviral immunity. TLR7 recognizes single-stranded RNA in endosomes, derived from host cells, or from cells infected with pathogens, which are internalized by macrophages and dendritic cells. 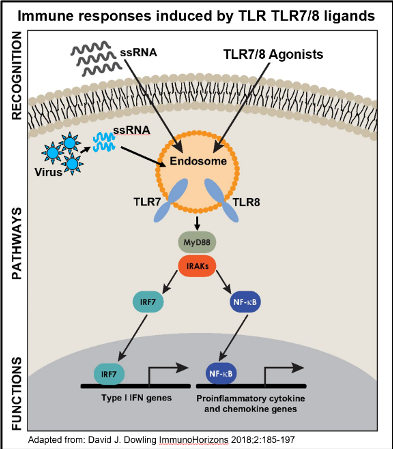 TLR7 Agonism as Anti-COVID-19 Virus Therapy: The coronavirus that causes COVID-19 uses Angiotensin-Converting Enzyme 2 (ACE2) as one of the mechanisms for cell entry and shares 79.6% sequence identity to SARS-CoV (PMID: 32015507), suggesting similar molecular mechanisms employed in infecting humans. Parallels can also be drawn between these viruses in replication, immune hyperactivity, and pulmonary destruction.

Although pneumonia appears to be the most severe frequent manifestation of infection due to SARS-CoV-2 and related viruses, the clinical presentation of lymphopenia and increasing viral load during the initial stages of COVID-19 infection, similar to that of SARS, suggest evasion of the immune system as a strategy early in the infection process.

TLR7 agonists have also been tested as potential candidates for prophylaxis against viral infections (including early post-exposure). In a recent study, it was reported that intranasal imiquimod, a TLR7 agonist facilitated robust immune response, which controlled the pathology associated with influenza A virus infection (PMID: 30787331). Similarly, it was observed that topical application of imiquimod before intradermal vaccination with influenza virus significantly improved immunogenicity not only against the vaccinated virus but also non-vaccine strains suggesting that TLR7 agonists may also serve as potent adjuvants (PMID: 26559482)

The observation that TLR7 agonists can activate the host immune (innate and adaptive) system suggests that, in addition to a potential role in controlling the SARS-CoV-2 infection, these agonists may also help prevent infection by counteracting immune evasion prophylactically in both pre and post exposed individuals. TLR agonism may be an attractive approach in augmenting the innate and adaptive immune signaling, early in the infection process. 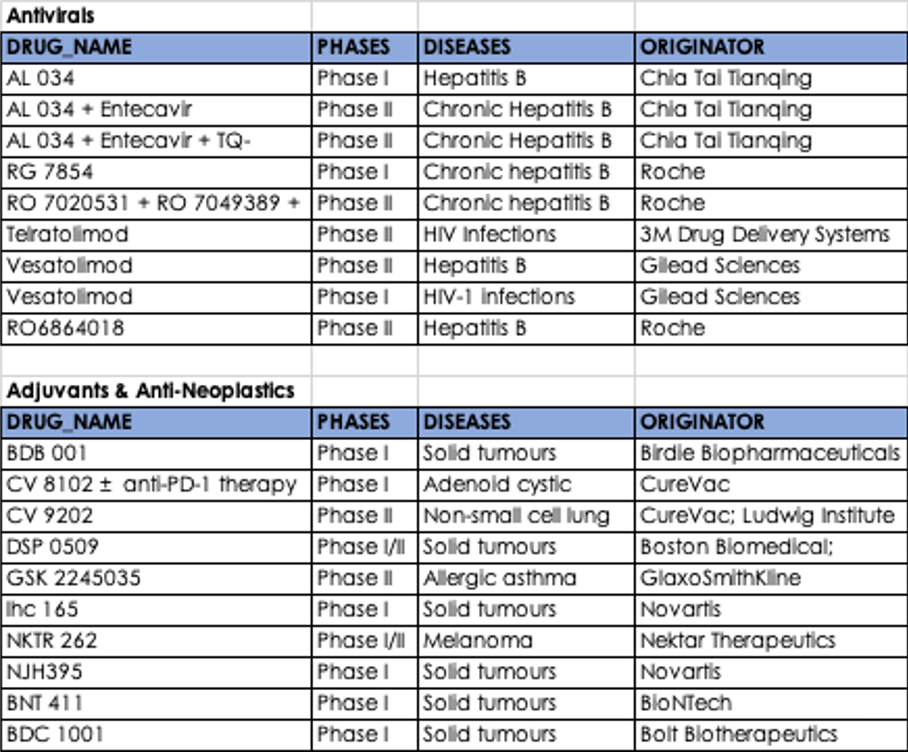 Currently, several TLR7 agonists are in clinical development as antivirals, adjuvants, and anti-neoplastic agents. As part of the developing armamentarium, it is tempting to suggest the potential utility of these compounds for addressing the ongoing COVID-19 pandemic.